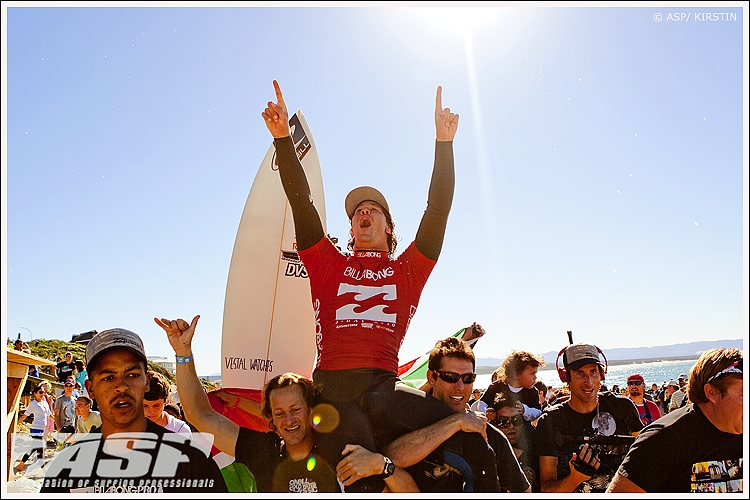 Event No. 4 of 10 on the 2010 ASP World Tour, the Billabong Pro Jeffreys Bay was nothing but blaring Vuvuzelas and roars from the bluff as these two titans went tit-for-tat in an incredible Final exchange. The young South African proved the victor, dominating from the outset and securing an emotional first win.

“This is the best day of my life,” Smith said. “The crowd on the beach has been supporting me the last few days and hearing the cheers and the Vuvuzelas just gets me fired up to perform. It feels like they’re pushing me along. I couldn’t have done it without them.”

The most experienced surfer at Jeffreys Bay, Smith left very little to chance in the Final against Melling, opening his account with a blazing 8.90 before backing it up with some scintillating forehand surfing for a 9.03. The combination of scores (17.93 out of a possible 20) proved insurmountable for Melling.

“I knew the swell was dying and I had to take advantage of every wave that came through,” Smith said. “Adam (Melling) is such a dangerous surfer. He’s been in form all day and I knew that if he got the waves, he would get the scores. I went out there knowing I had to open up strong.”

“It definitely is a different feeling,” Smith said. “To be chasing the lead and defending the lead are two different things. It’s a long year ahead and you can’t count anyone out until it’s over. I’m going to enjoy this feeling for now.”

Smith’s Final’s berth almost never was, as the big South African was comboed by lethal Australian Bede Durbidge (AUS), 27, with four minutes remaining in their Semifinal clash. Catching two waves in under a minute, Smith unloaded a barrage of aerials and forehand blasts to claw his way back into the lead.

“I’m still not too sure what happened – it’s all a blur,” Smith said. “I got that first one where I did the little grab air that I didn’t think was good, but the judges scored the whole wave pretty well. Then I backed it up and put everything I had into it.”

Melling’s “Cinderella” climb to the Finals was nothing short of sensational. Rated a lowly 41st on the ASP World Title Race rankings heading into Jeffreys Bay, the 2010 ASP Dream Tour rookie powered his way through five rounds of competition before coming short in the Final. His Runner-Up finish sees him bumped up to ASP World No. 19, well inside the safety zone for the dreaded mid-year field reduction.

“The ocean didn’t cooperate with me in the Final so that’s a shame but I couldn’t be happier,” Melling said. “We had amazing waves and to get the best result of my career is huge. I came into Jeffreys with a long road ahead if I were to make the mid-year cut-off, and now that I’m 19th, I feel like I have a bit of a buffer heading into Tahiti. I worked really hard to get here and I want to stay here.”

Durbidge suffered one of the hardest losses of the event, having defeat snatched from the jaws of victory by a last-minute crusade by Smith. Despite the bitter loss, Durbidge’s Equal 3rd vaults him from 10th to 7th on the ASP World Title Race rankings heading into the fifth event of the year.

“I had him comboed with only four minutes to go,” Durbidge said. “He took off on that one-footer and pulled that ‘Superman’ air and finished off well, then came out and got another one. I think he got two waves in a minute or something. It’s a hard way to lose, but Semifinals is my best result of the year and it’s something to build on. The focus is on Tahiti now.”

Taj Burrow (AUS), 32, consistently wowed audiences with his performance from Round 1 onwards, collecting the event’s highest heat total in yesterday’s Round 4. Despite today’s Semifinal loss at the hands of Melling, the Western Australian moves up to ASP World No. 2 heading into Tahiti.

Are you really keen?

Just about flat this morning