As expected, it’s very tiny this morning. I didn’t see anything above waist high in an inspection of Collaroy-Narrabeen and Dee Why-Longy stretches. It was glassy and the skies were clear (despite the call last night for showers this morning). Your best bet for a wave is going to be at your fave south swell location. Get out early because the wind is going to pick up and we’ll have a chance of showers from midday.

Tomorrow looks pretty ordinary with the call being for powering southerly wind and not much in the way of swell. Lovely.

Long range outlook for the Sydney region suggests we might see a slight uptick into the chest high range toward the end of the week, but at this stage it doesn’t look more interesting than that. Wish it was otherwise, but what can ya do?

Have a great day anyway, that’s what!

A high pressure system over the Tasman Sea is slowly moving towards New Zealand maintaining a ridge to New South wales north coast. A cold front will bring southerly change to the south coast this morning extending to the central coast in the evening and to the north coast Sunday morning before weakening into a trough off the far north coast. Another weak southerly change is expected to develop on the south coast during Tuesday.
Forecast for Saturday until midnight

Winds: North to northeasterly 10 to 15 knots tending northwesterly by early evening then tending southwesterly up to 30 knots later in the evening. Seas: Below 1 metre. Swell: Easterly 0.5 metres. The chance of thunderstorms from midday.
Forecast for Sunday 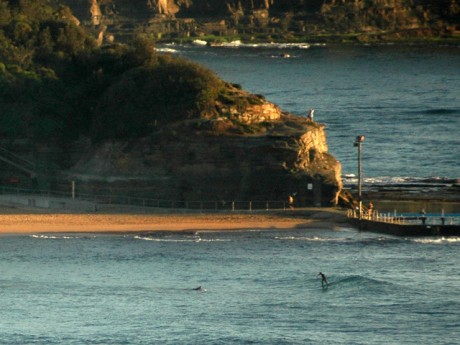