Now, here’s a mystery. According to the MHL Sydney waverider buoy, the swell is dead south at a respectable three metres with an okay period of close to 9 seconds. And yet it’s only about waist to chest high at best along the Dee Why to No Man’s stretch. There were a couple chaps on a small and junky peak at the aforesaid No Man’s and the wave in the picture broke for some distance, but the SSE wind was pushing along at a junk-inducing 10-15 kts.

If you look at the MHL combined plot, you’ll see the swell spiked up to 4 metres at Batemans Bay late yesterday and has now dropped back just under two metres at daybreak. Sydney seems to have peaked at closer to three metres and is headed downward pretty quickly.

All of which is a long way of saying that you should get out there asap while the tide is starting to run back in (the low was 0730) as it heads for a high at around 1340. The wind is set to moderate as it swings through the onshore quarters from SE to NE by this afternoon.

Huey’s looking like staying in an indolent mood for at least another week to ten days according to the latest run of the wave forecast models for our part of the world. It would appear that we can expect the energy levels to bump up and down in the ankle to waist high range across the period.

Go well with your day and good luck with your wave hunting! 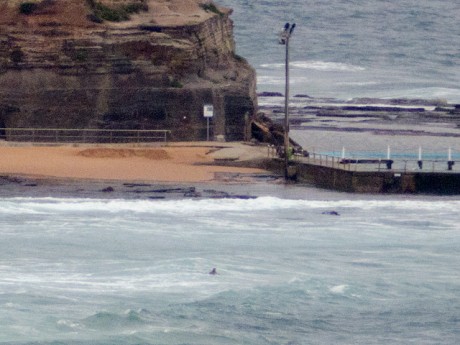 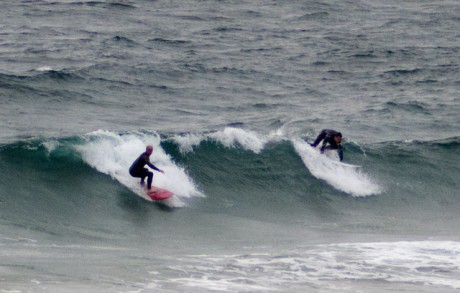 A high pressure system over the Bight will move quickly east through Bass Strait to the Tasman Sea today. It will then remain over the southern Tasman Sea through the week, with a ridge extending to the mid-north coast of New South Wales. The next southerly change may affect the New South Wales coast on Thursday.

Winds: North to northeasterly 5 to 15 knots becoming northeasterly 10 to 20 knots during the afternoon. Seas: Below 1 metre increasing to 1 to 1.5 metres by early evening. Swell: Southerly 1 metre.