Too south for Dee Why?

1315 update: Wind is working around to the south and letting the swell come in (as the Goat foretold!) swell is a touch over the 2 metre mark now but the average period has slipped back a bit to around 9 seconds. The combo is delivering some shoulder high sets for a reasonable crew parked at Dee Why point. Sets look a little bigger in the beachbreak, but the sideshore wind seems to be more of a factor as well, plus those banks are really not in good order. Most waves are unmakeable shutdowns. Still, at least there is some energy and the skies are still sunny.

I was scratching my head at 0900 because the MHL buoy was showing two metres of south swell with a period spread of 10-13 seconds – and yet… and yet there were only a few bods in the water at Dee Why chasing waist high little dribblers… wha?? The wind was SW, so as you can see from the pics, the surface conditions were pretty clean. The next tide is a high at around 1245, so we have the tidal push all morning. The Bureau says the wind will come around to the south before long and maybe as that happens we’ll see the swell start to come in more strongly. Of course the surf options will be limited to just a few spots once that happens.

The southerly is set to hammer along steadily across the next three to 4 days too.

The low has moved further away from New South Wales coast. The high is expected to become a dominant synoptic feature over the southeast Australia during the next few days, moving slowly eastward and entering the southwestern Tasman on Thursday.
Forecast for Sunday until midnight

Winds
Southwesterly 15 to 20 knots turning southerly during the day.
Seas
1 to 1.5 metres increasing to 1.5 to 2 metres during the afternoon.
Swell
Easterly 2 metres tending southerly from the late morning.
Weather
The chance of thunderstorms.

Winds
South to southeasterly 10 to 20 knots becoming southeasterly up to 10 knots during the evening.
Seas
Up to 1.5 metres.
Swell
Southerly about 2 metres.

A morning to sleep in, maybe later

A particularly heavy shower rattled down on the roof tiles just after I grabbed the pic at around 0645. Just kinda underlined the yuck factor. The south swell is a couple metres on average and the period is close to 11 seconds. But Dee Why was a grey, undistinguished mess thanks to 20-30 kts of SSE wind. Eminently missable, but there were still a few bods in the water catching the odd messy and burgery little peak. Admittedly I could only watch for a few minutes before having to seek cover, but from where people were sitting in the water, I’d be surprised if the sets were much above shoulder high – if that.

The junky and horrible conditions look like continuing through tomorrow before we retun to partly cloudy and dry with light winds on Monday.  My fingers are crossed for some little waves to be around on Monday morning because if the latest run of the models has any basis in fact, we’re in for a stretch of minorness after that.

Sunny afternoon with a slowly fading south swell provided yours truly with a some picture taking opportunities at Long Reef. I shot for about an hour (from about 1600-1700). The swell produced chest to head high sets for the good sized crew at the bombies. Just click on the pic below and you can go check ’em out… 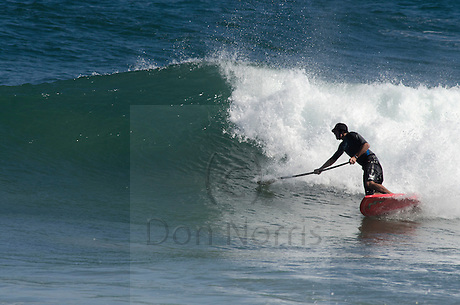 Fading but not gone

Clean surface conditions this morning as yesterday’s south pulse backs off along Sydney’s beaches. If your favourite stretch of sand doesn’t like straight south, there’s no need to bother. If it does, you’re looking at mostly waist high with the odd sneaker into the chest high range. The trendlines are pointing downward, so I think we can expect the lulls to get longer and the sets to get smaller through the day.  With luck though it shouldn’t die away to nothing at the exposed spots.

The wind is supposed to be light this morning and only in the 10-15kt range from NE later.

Next tide is a moderate high at about 1330, with the low hitting just before dark at 1940.

I got out and about with a camera yesterday, so I’ll have a few snaps to share later…

Finally, Tim Bonython has made another couple pairs of tix available to his Australian Surf Movie Festival shows at the Harbord Diggers on Friday and at Palmy RSL on Saturday. If you’d like a chance to get a pair to either show, just use the feedback link top right on the home page and send me the name of you and your friend along with a mobile number for me to confirm back.

Go well with your day!

A strong high pressure system to the east of Tasmania maintains a ridge northwards along the New South Wales coast. The high is forecast to move over New Zealand by Friday. The next cold front is expected to approach from the southwest, and is expected to bring the next southerly change to southern and central parts of the coast during Saturday.

Winds: North to northeasterly 15 to 20 knots increasing to 20 to 25 knots by early evening. Seas: 1.5 to 2 metres. Swell: Southerly 1 metre tending easterly about 1 metre during the evening.

One wave set breaks a lull for the point fans.

Light winds and a somewhat intermittent south swell for the morning folk on this Monday. Bureau says there could be a few more showers as the day goes along. From the look of the buoy data and the forecast models, we should have more or less the same conditions for the rest of the day.

Sets at Dee Why are in the chest high range. There was a real difference in consistency between the point and the beach. I guess the swell’s mostly missing it, but that hasn’t dissuaded a sizable group of optimists.

Outlook for the next couple days is still looking pretty much the same as yesterday’s run of the models. And the good news is that from Thursday through the weekend south swell spots should be kicking into high gear as 3-5 metres of 10-11 second energy arrives. The wind will be pretty strong though. According to this morning’s models it’ll be SW at 20 to 25 kts – give or take – across the entire period.

While Sydney surfers will be enjoying that juice, your correspondent will be spending some time with his family on the other side of the pond – and it looks like being damn small for the coming week. boo.

Go well one and all!

Shorter waits for waves at the beach compared to the point.