Tide was low at 0615 so by the time most people were paddling out for the early, it had turned and was heading back in. That should add a little extra energy to the diminished and now more southerly swell. Out at sea it’s a couple metres at 10 seconds apart. The change from SE to S has reduced the number of surf options and even at exposed spots such as No Mans, the biggest set I saw was a bit over head high. But mostly it was in the waist to chest range.

Around at the Collaroy to Narrabeen stretch there were some small peaks near Marquesas and what looked to be a few options immediately north of there. But it wasn’t as big as Dee Why.

This looks like being the day becaue tomorrow the wind goes southerly for the next 48-72 hours at least. Longer term though it does look as though we’ll be treated to another fun pulse at the end of the week.

Wind is set to be offshore all day and the skies should be sunny as well. I’ll try to get out and about with the camera, so wave hi if you see me!

Huey’s back in da house

Swell arrived down south yesterday and while most of us were sleeping last night, it started coming up in Sydney as well.

Swell at sea is currently showing at about two metres from the south with a useful average period of 10 seconds to which the big guy is adding the odd 14 second prowler to keep things interesting.

Wind was out of the west at 0700. Velocities were in the 10-15kt range, but the forecast says we can expect a swing to the SW soon and by midday we’ll be looking at 25-35 kts. The latest MHL data supports the Bureau’s forecast of a swell increase into the 3-4 metre range at about the same time as that wind really gets going. We’re also set to lose the early morning sunny skies too as things cloud up and the possibility of a shower or two develops later.

The latest run of the forecast models seems to indicate a week of south wind and solid swell.

Not a good day for beginners from the look of things, but if you experienced surfers can get in this morning, there could be some fun to be had.

Have yourself a great Friday!

A low east of Tasmania is expected to move slowly to the east/northeast maintaining a strong to gale force southwest airstream over the southern and central parts of the coast throughout Friday before winds turn more southerly and ease on Saturday. An onshore airstream is likely to develop during Sunday as a ridge builds to the south.

South to southeasterly 15 to 20 knots.

Sunny morning with some south swell

Faintly offshore this morning and you’d think with a couple metres of 10 second period south swell out at sea, there’d be more activity at the Dee Why end of the Longy-DY stretch. It was twice the size yesterday afternoon when the period setting on the swell was only a second or two longer. However, there were some long lulls then, so perhaps there are still a few good sets about. That said, the crowd also tells a tale. Yesterday afternoon it was around the 30 mark at the point, and this morning it was less than 10.

Surface conditions were smooth, and the outlook is for this morning to stay that way ahead of a light afternoon NE breeze. The outlook is for the swell to fade away as Thursday goes along, so if you have the option, this morning would seem to be the best shot. And, from the shape of the swell forecast models, we could be heading into a week or so of tiny to flat conditions.

BTW, if you were in the water at the point yesterday morning, I might have got a picture of your stylings. Lots of waves were going from the point to the beach too, so here’s hoping we’re seeing the return of the famous superpeak for autumn and winter… 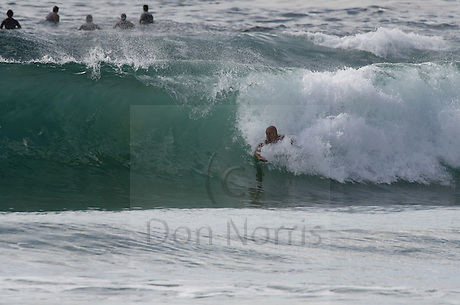 Weather Situation
A slow-moving high south of the Bight extends a ridge along the New South Wales coast. On Saturday the high is forecast to move across the Tasman Sea, while a broad trough approaches western New South Wales. This trough appears likely to bring the next significant southerly change to much of the coast later on the weekend.

Forecast for Thursday until midnight
Winds: Southeast to southwesterly 5 to 10 knots becoming light during the morning then tending east to northeasterly about 10 knots by afternoon. Winds becoming northeasterly up to 15 knots by early evening. Seas: Below 1 metre. Swell: Southerly 1.5 metres.

Well, well, what have we here?

When I knocked off yesterday evening, the MHL buoy was showing about 1.5 metres of ESE windswell. The average period was just 6 seconds. But at midnight Huey decided to ramp up the energy and by dawn the average period was a juicy 10 seconds with some 14sec peak component thrown in to add interest. Dee Why point was well populated by 0630.

We’re in for a warm one with an afternoon NE’r, so I’d say there should be surf options around the joint for the whole day. According to the latest run of the models, it seems that today might be the peak. Here’s hoping it sticks around in the surfable range through the weekend.

I’m hoping to get out and about with the camera today, so check back later to see what I found!

Please be aware
Wind gusts can be 40 percent stronger than the averages given here, and maximum waves may be up to twice the height.

Details of warnings are available on the Bureau’s website www.bom.gov.au, by telephone 1300-659-218* or through some TV and radio broadcasts.

A weak high pressure system south of New Zealand extends a ridge to the New South Wales coast. A cold front will pass to the south today, bringing a southerly change to southern parts of the coast overnight or early Saturday, before the next high drifts across from the west.

Winds: North to northeasterly 10 to 15 knots decreasing below 10 knots around dawn then becoming easterly and light during the morning. Winds tending east to southeasterly up to 10 knots during the afternoon. Seas: Below 1 metre. Swell: Southeasterly about 1.5 metres.