Articles tagged with "The Kick"

Two videos for you from late Wednesday afternoon. The first is from Collaroy and the second from Dee Why point. By 5 pm the swell was starting to get seriously big…

At 0600 the MHL buoy was showing 4.7 metres of SSE swell with an average period of nearly 11 seconds. Wind was southerly at 20-30 kts. Dee Why was unsurfably messy and it’ll stay that way all day. Around at Collaroy, the surface conditions were considerably smoother. As the pictures show there were some fat and full looking waves washing in but you could at least contemplate catching them.
From the shape of the Bureau’s forecast, we’re in for at least another three days of this wind. At the same time, the swell should be gradually weakening. Not a top outlook, but so it goes.
I managed to get a few pictures at Fairy Bower and North Steyne yesterday morning and the galleries are now online. Interestingly when I went by North Steyne on dusk while it was torrenting down and it had cleaned up dramatically. The swell was absolutely pumping too. It looked like Puerto Escondido.

Have yourself a great Tuesday!

Every now and then…

PICS by Don: The Kick and Collaroy Wed 18 May

After shooting the big stuff at Dee Why and Long Reef, I went around the corner to see if anything was getting into Collaroy. Sure enough, there were waves. They weren’t very big, but every now and then something kind of interesting came through the Kick. So I shot folks having fun until I filled up the memory card. As usual, click the pic below to visit the gallery. 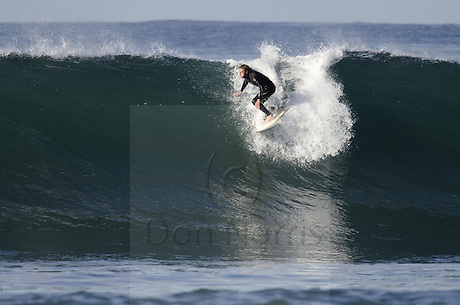 I’ve been out and about with my trusty Nikon D70s. In this post, I’ll share a few snaps I got at The Kick, Brownwater and Manly. I’ve also created separate posts for some shots I grabbed at the Bower and early on at south Narrabeen.

Rare moment of coverage at the aptly named Brownwater (1350)

sketchy decision on a less than wonderful Kick wave (1350)

One of the great things about being a Dad...

Sizable ones if you could get out to them between North Steyne and Queenscliff. (1320)

Kinda sectiony and the wind into it as well at North Steyne. (1320)

Only guy out in fairly appalling conditions around 0900.

Wandered down to the point for a closer look. One guy was in the water, but it looked like an awful lot of work for big, lumpy and weird waves. Biggest sets were into the double overhead range, but the point really wasn’t working terribly well. And the air was bitterly cold!

Went up to have a look at Brownwater, the Kick and Collaroy. Conditions at all three were pretty fat and slow. Brownwater just looked like a hoax for the chaps out there. Lots of offshore lines coming in, but not one decent section that I saw. The Kick was the pick with offshore sets into the head high plus range. You needed something pretty bouyant to work the relatively slow, spilling waves though. Collaroy wasn’t really doing it. Most waves were sectioning and very fat. An old school mal might be the go… something with a bit of momentum potential…

When I ran out of things I could do to get the site working again this arvo, I took the only reasonable action under the circumstances – I went for a wave! And when I get back, ‘lo, things seem to have stabilised again. I decided against joining the 50 or so bods at DY point and instead took the long board out for a few at the Kick. Some fun ones came through and PB reckons he got his best Kick wave ever. Anyway, here’s a pic to give you a feel for the sets…

The Kick had some kick this arvo

Just on dusk, I climbed up in the RealSurf crow’s nest for a last look at the point. Some very solid sets coming through as the sun sank in the west. Wave faces on the bigger ones looked to be in the 1.5x overhead range.

1700 and there are some serious sets rolling in

Just had a look at the MHL data and the latest update shows the swell has gone from 2m at 10 sec from the south this morning, to 3 metres at 12 seconds late this afternoon. It still looks as though the swell will hit peak size overnight and then begin a gradual decline through tomorrow. but it should stay solid and fun size into the early weekend.

Thanks for putting up with our patchy service today. We’re scrambling to organise more resources, but it’s possible that things could be bumpy tomorrow if we get another big influx of traffic. That’s the challenge you face with a big redesign and move – until you go live, you just don’t know for sure what’ll happen.

Go well with your evening!