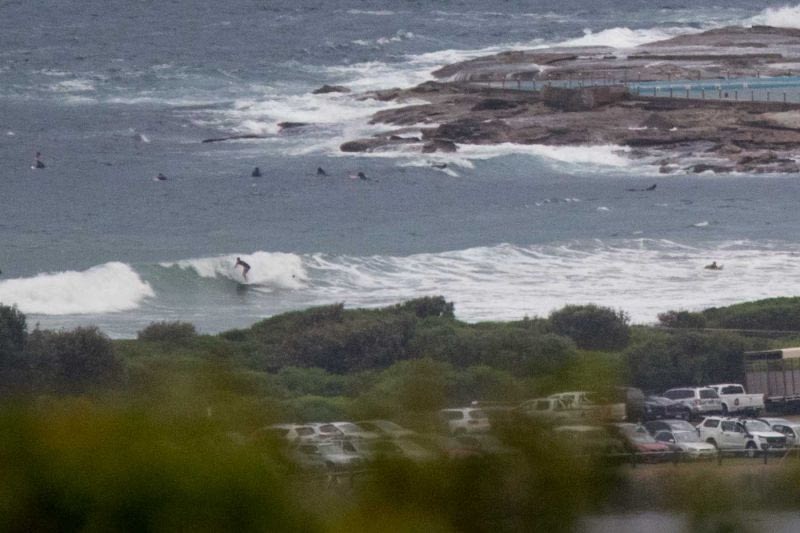 This morning sees scrappy, messy but not flat conditions at Dee Why. Fair number of people in the dodgy looking water and Dee Why itself is in full Australia Day mode under partly sunny skies. However, the forecast is showing a 60% chance of rain.
Swell is still out of the east at about 1.5 metres. Average period has slipped just below the 10-second mark, so the bomb sets today will probably be more like the sets of yesterday.
At Dee Why it’s looking like knee to chest with the odd plus.
Tide’s full as we head to the high at 1040 this morning.
Wind is set to be 10-15 kts from the east to NE today.
Outlook is for the wind to stick to this pattern more or less for the next couple of days and the swell models show the energy levels bouncing around the 10-sec mark with wave heights dropping a bit tomorrow and coming up a bit again on Thursday.
How was that rain last night? Got a good look at the dramatic consequences because it caught me on the road home. Drove from Balgowlah to Collaroy at about 40 kph. I mention it because an hour or so later my phone peeped to tell me that there was a partially treated wastewater discharge event at Warriewood at 0100 Australia Day. Water is “likely to be polluted” from Newport to Collaroy and dodgy along the Dee Why to Narrabeen stretch. But apparently it’s okay everywhere else in Sydney.
Have a great Australia Day one and all.