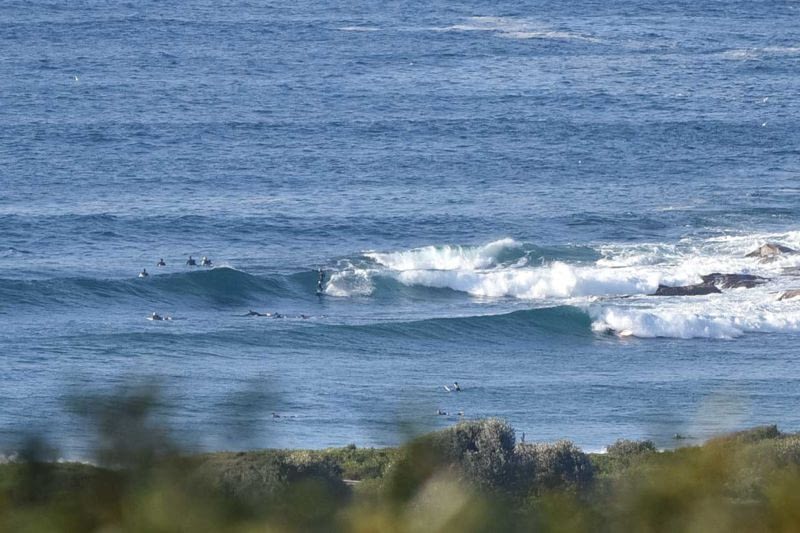 Sunny skies and better than that, a couple metres of 10-sec SSE swell lighting up Dee Why with chest to shoulder high sets at the point and along the beach. Tide’s heading into the high at 1245. Wind was out of the west at 10-15kts and it’s expected to move more SW later, but not pick up any more. So there should be waves all day and with any luck it’ll only drop back a bit through to mid week.

Have yourself a top old Sunday everyone!

Weather Situation
A ridge of high pressure lies over NSW. Winds will turn west to northwesterly on Monday ahead of the next trough, which is forecast to move up the southern coast during day. Winds throughout will generally shift south to southwesterly and strengthen late Monday or during Tuesday in the wake of the trough.
Forecast for Sunday until midnight
Winds
Southwesterly 10 to 15 knots, reaching up to 20 knots offshore until mid morning. Turning northwesterly 10 to 15 knots in the early afternoon.
Seas
1 to 1.5 metres, decreasing below 1 metre during the morning.
Swell
Southerly 2 to 2.5 metres.
Weather
Partly cloudy. 30% chance of a shower offshore, near zero chance elsewhere.
Monday 27 June
Winds
Northwesterly 10 to 15 knots turning southwesterly 15 to 25 knots in the early afternoon.
Seas
Around 1 metre, increasing to 1 to 2 metres by early evening.
Swell
Southerly 2 to 2.5 metres, decreasing to 1 to 1.5 metres during the afternoon.
Weather
Cloudy. 90% chance of showers.
Tuesday 28 June
Winds
South to southwesterly 20 to 30 knots decreasing to 15 to 20 knots during the evening.
Seas
2 to 3 metres, decreasing to 1.5 to 2 metres during the evening.
Swell
Southerly 1.5 metres, increasing to 2 to 2.5 metres during the morning.
Weather
Partly cloudy. 80% chance of showers. Showers heavy at times in the morning. The chance of a thunderstorm.