Swell and north wind for Sydney 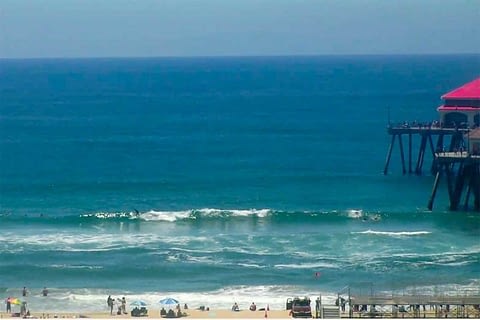 Hello Friends, Swell’s only backed off a touch. As of 0400 it was 2 metres and coming from the SE at 10 seconds apart. Wind was north 7-10 kts at 0540. The Bureau expects it to pick up though and be 15-25kts later, so you can probably write off anything in the southern corners once […]

Fun looking but not super consistent

Hello Friends, Swell has faded overnight and is weakening steadily. As of 0800 it was a touch under 2 metres and coming from the SE at about 10 seconds apart. Wind was light and the air, well it was chilly. Not too many in the water chasing some clean but mostly shutting down chest plus […]

Smaller, but not small

Hello Friends, Light SW wind and a high tide at 0730 combine with the slowly fading swell to deliver chest to head plus conditions at Dee Why this morning. Swell’s SE and around the two metre mark at sea with an average period of about 10 seconds. There were waves at the point and along […]

Swell early but wind the problem

Hello Friends, Hey! I thought it’d be bigger this morning, especially since last night the Eden buoy was showing 5 metres on peaks. What we had off Sydney as of 0500 was 2 metres of 10-sec period SE on average with peak heights of 3 metres. Unfortunately, the NE’r was into it from the get-go, […]

Hello Friends, Get out early or get skunked. Super clean and shoulder plus at 0630 under sunny skies thanks to a combo of light SW breeze and two metres of 10-sec SE swell. Weirdly, there were only two people at the point and just a few others scattered up the beach. Did everyone else tie […]

Not entirely hopeless, call it 4 out of 10

Hello Friends, The Bureau tells us the NE’r should start to make itself felt this morning, but for early risers, surface conditions were glassy, if somewhat sloppy. Swell is showing as mainly out of the SE at close to 2 metres with an average period of around 10 seconds. It looked like the shorter period […]

Hello Friends, If I was just looking at the MHL data this morning, I’d be urging you to get out there at once because it’s showing close to 2 metres of 10 sec period SE swell. However, the directional spectra reveals that we have a lot of NE-E chop from yesterday’s blow coming in as […]

Rainy start and smaller again too

Hello Friends, Not the most enticing conditions for an early morning surf at Dee Why. There were some little waves (probably around the chest high range on sets) but given the on-again, off-again rain and the somewhat bumpy and floppy looking swell, there were no takers as of 0700. The Bureau tells us that the […]

Yo, ho, ho me hearties

Hello Friends, Now that’s more like it. SE swell of a couple metres at 10 seconds apart on the primary swell direction. Throw in westerly wind and a dropping tide (low at noon-ish) and it’s coming together nicely. Sets are into the head high range and the crowd is, well, it’s not that crowded a […]

Hello Friends, Wind was SSW 15-25 kts inshore this morning. The Bureau says we can expect it to go southerly later. Swell is mainly out of the ESE to SE at around 2.3 metres on average with a period of a touch over 10 seconds. This was delivering a somewhat setty and choppy shoulder plus […]