Sunny, glassy and oh so tiny 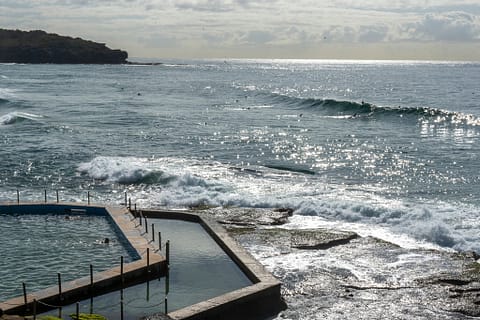 Hello Friends, Apart from the weak and tiny waves, it was a perfect morning for a surf along the beaches. At the better exposures, like south Curly where today’s pics come from, bomb set wave faces were approaching the chest high mark. Unfortunately, they few and far between. Mostly it was a case of sitting […]

Junky and small on Tuesday morning

Hello Friends, As the picture shows, it was not a great day for a surf at Curly or anywhere else. The wind’s been blowing ESE 10-15 kts since 0400 and it is knocking the stuffing out of the 6-sec period, 2 metre wind bump. Interestingly, despite the rainy weather, Beachwatch reports can water along all […]

Hello Friends, The numbers tell a story. Swell period was nearly 13 seconds from the SSE, but average height was less than a metre out at sea. So, there are still a few shoulder high wave faces at optimal exposures such as south Curly where the picture above comes from. Mostly though this morning it […]

A few more pics of a few more waves this morning

Hello again! I envy you if you were able to get in the water this morning. Conditions weren’t all time by any stretch of the imagination, but that said, they weren’t dire either. I’d call it 6/10 for being clean, waist to chest on sets but somewhat flabby thanks to an average period of around […]

Went by Manly and Curly this morning around 0900 and can report that from about North Steyne to Queensie there were a few weak little peaks offering mal-able moments for the keen. . Around the corner at Curly there were a few bods hanging out at the south end and some more up the beach. […]

Fat and small but just surfable

Hello Friends, Sorry to run late. Had a chance to see the activity from Manly up to Long Reef and the general picture is of flabby, waist high but still glassy wind swell lumps left over from yesterday’s blow. There were folks in the water from south Steyne to Queenscliff at Manly, but the biggest […]

Made the trip to Manly this morning and grabbed a few snaps from there and Curly on the way home. As you can see, it’s really best suited to mals. Waves would perk up, look cute for a moment and then run out of puff a few seconds later. But water’s warm and surface conditions […]

Hello Friends, Don’tcha hate it when you sleep in and miss out? That was your correspondent this morning. Doing the run to Manly and back this morning revealed beautiful, if tiny offshore conditions along the beaches. Manly was knee to waist plus, inconsistent and kind of weak looking. Swell was out of the SE at […]

From this morning: Manly and Curly

Had to be down Manly way this morning, so I stopped at south Steyne and grabbed a few shots of people playing around on a really fun looking tiny peak. Just perfect for some delicate longboard surfing. Glassy, knee to waist, warm… looked so fun, but I didn’t have a mal with. Went by Curly […]