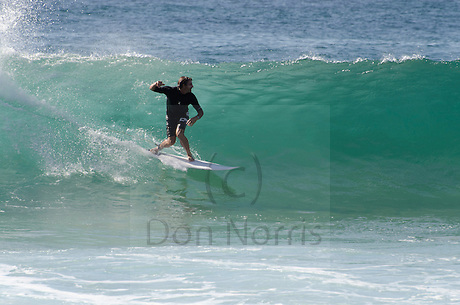 There are 160 more snaps from this session in my new gallery. As usual they’re all for sale. Just click on the pic you’re interested in when you get to the galleries and then look top left for the price options.

Such a beautiful morning in Sydney. I considered my options and, since the swell was tending east, I figured at a metre or so and about 11 seconds apart, that my nearest option would be North Narrabeen. So I grabbed the gear and headed down. As you might expect on a warm summer Sunday morning with shoulder to head high sets, the old Northy was damn busy. Taking a punt that there might be waves for the late, I decided to take pictures instead.

It was reasonably consistent, but even during the hour and a quarter I was taking pictures, you could see the energy levels were decreasing. The sea breeze came up pretty quickly as well, so when it began to ruffle things up, I headed for the exit. Drove down to Long Reef, Dee Why and Curly for a look, but everyone in Sydney was looking for a park and the waves were not getting any better. Oh well, at least I got a few pics…

After lunch I wandered over to North Narrabeen to see what was what. There were small waves from about the Pines all the way to the Alley. A bunch of bodyboarders were looking to get smashed near carparks, while up at Northy things were slightly less hectic for the small crowd. As with Curly, the waves weren’t much to write home about, but the lack of wind meant people could enjoy some soft, glassy little peaks that very occasionally produced a mildly interesting section.

I grabbed a few piccies, so check ’em out below…

BTW, if you end up wanting to buy a pic or pics from any of my galleries, then be sure to enter the coupon code HAPPYSURF and it will take 33% off the bottom line for ya.

After running an errand or two, I checked out beaches from Manly to Dee Why. Ended up paddling out at the point in sideshore, but sunny conditions. A few fun size sets came through and I grabbed some shots with my trusty Panasonic FT-1…

Dee Why point 4 April 2010 (watershots) – Images by Don Norris
All pictures for sale at very reasonable prices! Just click on the image you want and you will be taken to the gallery site where you’ll find an “Add to cart” option top left. Click that and you can buy and immediately download the picture.

Here’s a cropped sample from the collection.

I don’t know that these pics need any comment really. They were taken from [update] footage shot by Marco-Antoine Bouvant and passed along to us by the irrepressible Mr Tim Bonython. and will no doubt turn up in a future film festival! That place is nuts!!! Apparently the footage will be on the telly tonight…

I spent an hour on a warm Saturday afternoon shooting regular folks catching waves from North to about mid-Curl Curl.
Clicking on the main picture below will take you to the gallery where you can view ‘em all nice n’ big!
(Pics may be purchased and instantly downloaded too.)
North Curl Curl: Sat 20 Feb 2010 1530-1630 […]

Here’s a selection of pics from a group of 70 or so I shot a little after noon from atop the stormwater pipe at Collaroy on a rainy Sunday.

See all the rest of the Collaroy session pics here.

Spent half an hour shooting at Manly between the constant showers. Here are a few of the snaps. If you were in the water at the peaks between North and South Steyne from about 2-230pm, you might want to have a look at the whole collection here!

Fading, but still intense, south swell with strong NE winds made for an attractive combo. It was extremely crowded (30+) at Aussie Pipe, but shooting conditions were great.

To see all 80+ shots from the session, check out my gallery.

For Sale –  I have a Surtech (Tuflite) Velzy 12 foot Hawaiian Paddle board (not SUP) for sale.  Excellent condition. $950.00 (cost $1600.00 + new).  This board is a standard class racing paddle board and goes like the clappers, very fast.  Good cross trainer for paddling on flat days.  If you are interested I can send photos.  Contact Matt at  [email protected]

Fine, dry and ‘cool’ on the Central Coast this Tuesday morning.  The swell is smooth and small at 1 – 2 feet  from the east southeast.  There is a northwest puff, just turning light north northeast and forecast to freshen later.  Low tide at 0855 and high tide around 1520.  Local barometer 1017 hpa, 14 degrees C. 92% humidity.   Have a good one.

Saturday surf pics from Dee Why

Went shooting at Dee Why a couple times today. For the short first session, I set up just south of the Pole and shot toward the right handers on the peak in front of the SLSC, plus the occasional set on the point.

Check out all the pictures from the first session here

After running an errand, I came back for another session at noon. I ended up sticking aroun until 130pm mostly shooting the peak in front of the SLSC, but also grabbing the odd shot from the point. The peak had a lot more juice and though the wind was getting into it, there were some fun looking lefts and rights in amongst the numerous straighthanders. Chances are if you were in the water and caught any waves, I will have taken your picture!

Check out all the pictures from the 2nd session here