Still big, but not stupid big

Briskly offshore and mainly clear skies as Tuesday got started. Swell has come down into the 3 metre range at around 10 seconds apart. It’s a mix of south and easterly swells, so when they match up there are some shut the joint down sets at Dee Why. The medium size ones look almost approachable but they’d still be closer to 2x overhead than not and the chocolate coloured water means it’s polluted. Another day to watch rather than participate for most of us.
Tide’s high at 1000, so good luck to those in the affected zones.
Although it’ll be big today and not small tomorrow either, the swell should fade steadily and by Friday it should be closer to the usual waist to chest conditions typical of this time of year.
Hope to get a few more pictures for you today and, if my broadband’s restored, I have a couple of short videos from yesterday to share.
Go well, stay safe and keep on smilin’!

Still not into the safe range at Dee Why yet

Banks getting rearranged up the beach

Still a few impressive bomb sets in the mix

If you were on it from before 0600 at Dee Why point this morning, there were set waves into the head plus range (on faces). Surface was still relatively smooth too, but the WSW wind was already 10-15 kts and on its way to 25-35 kts before going southerly at 30-40 kts by around lunch time. Your window of opportunity is ever so brief.

Swell is due to peak today in the 3-4 metre range. At 0400 it was SSW at around 3 metres with a 10 second period. From the forecasts it looks as though it’ll drop back a bit overnight, but it could very well be around the present size again tomorrow morning. Wind’ll still be strong at 20-25 kts says the Bureau, but at least it’ll be SW at first (like today) so there might be the odd opportunity around the place.

Wind is shaping to be an issue across the front half of next week, but according to all the models, we should have a steady supply of of SSE swell through to next weekend. The very long range modelling has the wave energy dying away from around Tuesday week and if they’re right, we’ll have micro conditions for an extended period. Hope they’re wrong on that one and right on the shorter term.

I’ll get out with the cameras this morning to see what I can find, so maybe check back later.

And have yourself a top old Saturday!

Bankless beachy not the plan

0600 and still relatively clean on a building swell.

Before the gale force SW’ly wind and swell peak arrived

This forecast is also available via scheduled broadcasts on marine radio.
Latest Coastal Observations
Tide Predictions
The next routine forecast will be issued at 4:05 pm EST Saturday.

Come up a bit

Swell is showing at Dee Why as of 1630 on Sunday. Sets look to be in the shoulder plus range. Wind is hammering it, but I’d say there’s hope of a little something for the early tomorrow…
Shot this with my ancient Century 650mm and a Sony a7r… lot of heat haze affecting the detail

South swell was 3 metres at around 10 seconds apart as Saturday morning got started. Skies were gloomy skies and the wind was a stiff SSW of 20-30 kts.

Yesterday I finished cutting together a highlights reel from my 1977 surf footage for next Thursday night’s Solstice Jam Surfrider fundraiser at Deck Bar. Peter Crawford appears at Dee Why point, Northy and Burleigh. Mumbles, Mark Warren, Terry Fitz, Shaun Tomson, Rabbit and, of course, MP also feature. Today I’ll be pulling together some more recent footage of very solid south Narrabeen to add further visual spice to the night. Along with live music, Surfrider crew will be raffling off boards, wetties, surf lessons and even 2-hour photo sessions from wozthatyou’s Doug and, ahem, me. For $20 you’re in the door with a voucher for a couple drinks and finger food. One of those nights when people will be saying ‘you shoulda been there…”

Celebrating protecting our waves and beaches through music, film and community.

Surfrider Foundation is a devoted group of surfers, coastal scientists and activists who have been protecting waves and beaches for the past 20 years. Proceeds from this event will support the work of Surfrider Foundation’s high impact environmental programs.

“I’m really looking forward to this event. It will be a celebration of the great work that Surfrider does for our ocean and beaches – as well as a brilliant party” – Barton Lynch former world surfing champion and Surfrider Foundation Board Member.

Featuring: Live music from some of the Northern Beaches’ finest, performers, including Hannah Darling (from The Voice), Paul Berry, Mikey Redlich and others.

Surf films include footage and images from Justin Crawford and some of Don’s rare archival 1977 footage of PC, mumbles and others at Dee Why Pt, Northy etc.

Be there for a chance on the night to win a custom-made board by local Northern Beaches shaper, Mike Psillakis.

Very nice looking swell and wind combo at 0430 or so this morning for Sydney. Swell really popped up over yesterday and was kicking along at 3 metres from the south with a punchy 10 second average period. Plus the wind was light and from the west. By daybreak the Bureau reckons it could be going harder and starting to move into the southerly quarters. Happily, the worst that will happen is that you might see a mix of s to sw this afternoon. And just to add some push, tide’s low at about 0530 and then coming in until 1120. Weather should be clear too.

According to the swell modelling, the pulse will peak during the day and then roll off overnight and be back in the 2 metre range on Friday morning. There’s some divergence in the reckoning for the weekend, so I’ll go conservative and call for 1-1.5m easterly on Saturday and most of Sunday.

Be interesting to see what the Goat reckons, but my reading of the models is that we could potentially see some sizeable stuff on Monday if the next system blobs around Tasmania and in close to the east coast. If it stays out too far in the Tasman, then all the energy will head away from our surf zones.

Apologies for the long absence, but I was away from an Internet connection for the better part of a week. I’m back in Santa Barbara until Tuesday Sydney time, when it’ll be into the aluminium tube once more for the long passage home to Oz. Hoping to get another surf in here before taking off, but it’s microscopic right now…

Have a great day!

Weather Situation
A deep low pressure system off the South Coast is moving east, while a high in the Bight remains slow moving. Strong west to southwesterly winds in the airstream between these two systems will gradually ease during Thursday as the low weakens and moves southeast. Winds will become light under the dominating ridge on Friday, then turn north to northwesterly and strengthen on Saturday ahead of an approaching cold front. The front is expected to bring south to southwesterly change to New South Wales coast during late Saturday and Sunday.
Forecast for Thursday until midnight
Winds
West to southwesterly 20 to 30 knots tending south to southwesterly 10 to 15 knots in the afternoon.
Seas
Up to 3 metres decreasing below 1.5 metres during the afternoon.
Swell
Southerly 2 metres.
Friday 27 April
Winds
Southwesterly 10 to 15 knots decreasing to variable below 10 knots during the morning.
Seas
Below 1 metre.
Swell
Southerly about 2 metres decreasing to 1 metre in the afternoon and evening.
Saturday 28 April
Winds
West to northwesterly 5 to 10 knots increasing to 10 to 20 knots during the evening.
Seas
Below 1 metre increasing to 1 to 2 metres during the evening.
Swell
Southeasterly 1 metre.

Clear blue skies as Sunday kicked off. But better than that, Huey’s amped up the south swell with a ten second period. There’s a real difference in juice level compared to yesterday. Average size at sea is nudging 3 metres so set wave faces at exposed spots will be head high to 1.5x overhead.

Wind’s were light and WSW to begin but the Bureau says that by this evening we could have NE-SE’ly conditions. And there’s an 60% chance of  showers developing too.

So, get out there asap and have yourself a good one!

A low pressure system with an associated trough is approaching New Zealand. A strong high pressure system in the western Bight extends a ridge to the northern Tasman Sea. The high is expected to move over southeastern Australia by Monday, after another front moves along the coast during today. It will then become centered in the northern Tasman Tuesday through Friday, maintaining a ridge across northern NSW.

Winds
West to southwesterly 10 to 15 knots tending northwesterly during the afternoon.
Seas
Up to 1.5 metres.
Swell
Southerly about 2 metres.

The swell kicked on into a second day and Sydney surfers were treated to more three metre south swell with sunny skies and generally offshore winds. I looked around but decided Dee Why had the best looking waves for shooting (and later, for surfing!).

Just click the picture below to jump to the gallery of shots. 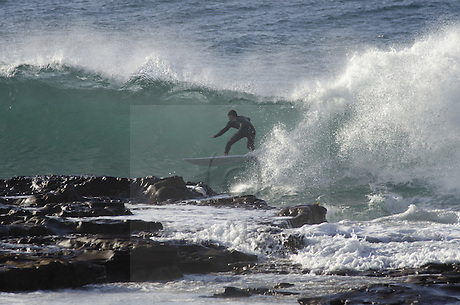 Friday morning dawned sunny and offshore with a pumping 3 metre south swell at Dee Why. Your humble correspondent set up the camera and spent a couple hours shooting under great conditions. Have a look if you were in the water, I probably got a shot or two at least. Have look even if you weren’t in the water, you might see a mate in amongst those great waves. As always, click the pic below to go to the gallery. To see buying options, click individual pictures and look top left for the link to the prices. 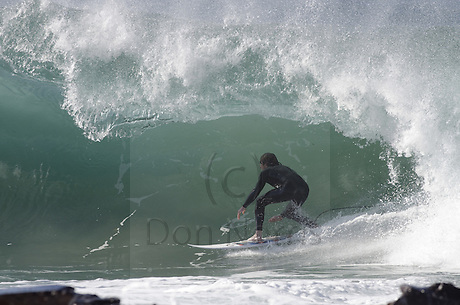 PICS by Don: Dee Why and Newport on Sunday

Another sunny day, so in between picking up rubbish at south Curly and running the daughter to soccer, I also jammed in a couple shooting sessions. The first was during the late morning at Dee Why and the second was much later in the day at Newport’s Pool. As always, clicking on the two pics immediately below will take you to the relevant galleries. 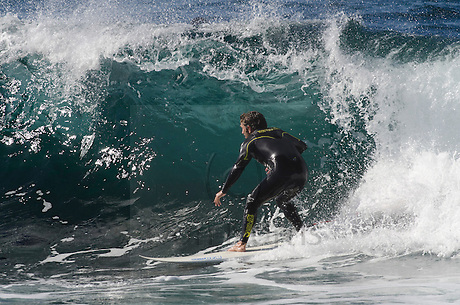 (above) Click on the image to see more pics from Sunday morning 15/5 at Dee Why. 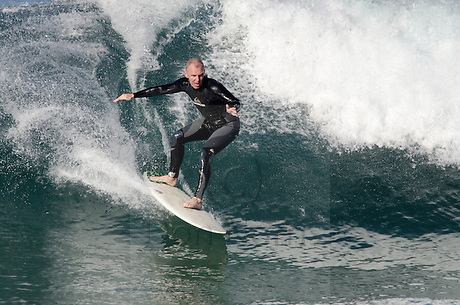 (above) Click on the image above to go to the gallery of pictures from the Pool at Newport taken Sunday afternoon, 15/5

Grey but not flat

A busy day for my family and I, so I’ll keep it brief. Conditions, as noted by Kev are pretty ordinary. It’s junky and wind-affected even in the semi-protected south corners. Not so bad that you’d have to say it was unsurfable, but as with yesterday, it’s going to require some commitment to the cause to get out there.

The swell has picked up a little more energy this morning, so that should help. The wind is set to decrease and swing around to the NE, so there could potentially be interesting possibilities for the late in the north corners.

Outlook for the next few days is for small but not flat, windswelly conditions. But come about Thursday… gee the prospects are looking very interesting indeed. Could be 48+ hrs of solid south swell. However the wind setting currently looks marginal (south to sw and strong).

Not fabulous, but hey, you can sort of catch a few.

Burgerland at the point.

At least there'll be something for the girls to compete in.