Cold and windy start to the day, but the skies were largely clear and the south swell has picked up overnight. At 0730 it was dead south at 3 metres with an average period of 9 seconds. Wind is straight offshore at 20-25 kts and it’s clearly holding a fair amount of the swell offshore. Sets at Dee Why point were around the shoulder to head high mark, but pretty inconsistent. It’s a foot or two bigger up the beach and the sets are considerably more frequent.

The offshores are set to swing gradually around to the south by midday and then the Bureau tells us that we’ll be seeing 35-45 kts.

Swell is expected to build from the present 3-5 metres to 5-6 metres by dark and then to stick around at about that level through tomorrow.

Unfortunately, surf options look like being pretty limited thanks to the powering southerlies – which are forecast to be strong through Sunday and into early next week.

Definitely not beginner material this weekend.

Go well with your Friday one and all!

Weather Situation
A low pressure system over the southwestern Tasman Sea is deepening and a high pressure system near the Bight strengthens a ridge to the east. A strong pressure gradient is developing between these two systems and winds along New South Wales coast are increasing. The low will deepen further during Saturday before moving towards New Zealand on Sunday with winds expected to ease.
Forecast for Friday until midnight
Winds
Southwesterly 30 to 45 knots tending southerly 35 to 45 knots in the middle of the day.
Seas
3 to 4 metres increasing to 5 metres during the morning then decreasing to 4 metres by early evening.
Swell
Southerly 3 to 5 metres increasing to 5 to 6 metres this afternoon and evening.
Weather
The chance of thunderstorms offshore, extending throughout from the late morning until late afternoon. Large swells breaking dangerously close inshore.
Saturday 11 August
Winds
Southerly 30 to 40 knots.
Seas
3 to 4 metres.
Swell
Southerly 5 to 6 metres.
Weather
Isolated thunderstorms early in the morning. Isolated thunderstorms in the afternoon and evening. Large swells breaking dangerously close inshore.
Sunday 12 August
Winds
Southerly 25 to 30 knots.
Seas
3 metres.
Swell
Southeasterly 4 to 5 metres decreasing to 3 to 4 metres from midday.

It was a sunny day in Sydney and Manly’s North Steyne was producing a steady supply of chest to head high sets for a keen crowd of punters. I set up the camera out in front of the SLSC and started shooting at around 1130. Over the next hour I managed to get a couple hundred snaps of surfers having fun. As always my aim was to catch regular folks at the peak moment(s). Click either of the pics to jump to the gallery. 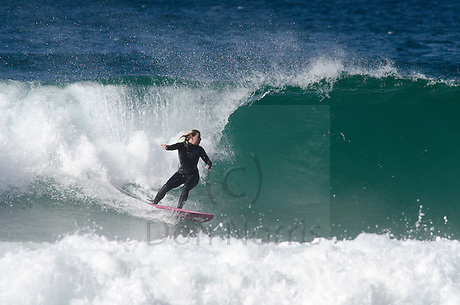 Postcard from Cali (one last time) & waves for Sydney

Flying day for yours truly. At around 3pm Sydney time my Delta 777 flight will be climbing away from LA as it heads for Oz. Tomorrow morning I’ll be back in the land of warm water, and I hope, a wave or two to clear the jet-lagged brain.

It looks as though the punchy south swell of this morning will have faded quite a bit by tomorrow, but with luck there should still be surfable options around the place. As I typed this out at a little after 0500 Sydney time, the wind reports were showing westerly. But the forecast is for another bout of stiff SW in the morning which should then decrease as the day goes along. From the shape of the forecasts, it looks as though the swell will be overhead early but by dark be into the head to chest high range on sets at the exposed spots. Saturday could be waist to chest with the odd head high bomb.

One last set of piccies for ya from southern California. I took these yesterday when Roberto, pal Guy and I wandered around looking for something to ride mals on. There were some tiny SW sets around the place as we travelled south of Rincon toward Ventura. We ended up splashing around at a popular longboarding spot (sort of a Collaroy set up) called Mondos. Mondos is just down from Pitas point which can be quite a good wave during winter time. Anyway, it was extremely small and very slow, but we all got a few. Water was cold of course, but modern wetsuits made all the difference. In true California style when we got out of the water we headed off to a mexican restaurant for the usual post surfing fare and beers. Perfecto!

A high pressure system centred over Bass Strait extends a broad ridge over New South Wales while a low develops over the Tasman Sea. Fresh southerly airstream along the coast will ease on Friday as a ridge weakens. Winds will briefly turn westerly from late Saturday ahead of a trough expected on Sunday and Monday. Fresh to strong south to southwest airstream is likely to redevelop early next week in a wake of the trough with a possible low deepening just off New South Wales coast.

While lots of folks were off at Melbourne Cup parties, a few of us were chasing entertainment of a different sort at Sydney’s south swell spots. Said swell perked up through the morning, going from around 2 metres on average at daybreak to closer to 3 by early afternoon. The average period bumped up a little as well to about 9 seconds. At Dee Why point that translated into sets with faces into the head high range. There were quite a few lulls, but by the time I went in around 1300 they were turning up more frequently. The southerly seemed to be staying out to sea, so the surface was pretty smooth. Looked at from the beach it seemed kind of sectiony, but in the water it wasn’t too bad.

Around 3 pm the wind swung straight south and the ocean is pretty beat up looking even in the corner at Dee Why.

The latest run of the models predicts a drop in the swell overnight sadly. The wind is set to be SW in the morning, but then it’s expected to work around to the south and south east by tomorrow afternoon. Right now it looks like there might be something surfable in the morning, but after that we seem set to drop back into marginal until the next little pulse turns up (Sunday morning maybe).

Here’s a little gallery from the morning’s sesh…

It’s on again this morning kids

Looks very much as though we have another day of quality swell for the Sydney region’s protected south spots. The average size of the swell at sea has moved up to three metres and the period is a useful 9-10 seconds. The wind is still an issue though. The Bureau hasn’t changed its call and we therefore have a strong wind warning again today. That will limit the surf options and increase the traffic factor pretty obviously.

Dee Why point was well attended again this morning. Sets look a bit juicier than yesterday, but at least while I watched, not dramatically bigger.

It’s on my agenda to get out with a camera of some description, so I’m hopeful there’ll be a few more pics to share later on.

If you’re a beginner, this is a day to watch not to join in. The swell is set to ramp up at least another metre for tomorrow. And the period will be increasing too if the models have it right. So the waves are going to be big and powerful at exposed spots.

Saturday still looks like peak day on the models, but Sunday shouldn’t be small. Waves all weekend I’d say at this point.

Have yourself a top old day!

Waves hangin’ in there for another day

Is April delivering or what? Nine days in and 9 days with waves. Overnight the average height of the swell at sea jumped from well under 2 metres to just on three in the Sydney region. It’s straight south and the average period is around the 9 second mark. Dee Why’s seems to be biggest in the shorebreak (where I saw a couple shoulder high sets). The point appears to be largely missing it, but there a waist high thing came through while I was watching it at around 0645.

The breeze is kinda cool and offshore as we get started on the day, but it’s set to quarter around from the S-SW to S-SE. Happily it’s also supposed to ease off, so with luck it won’t be too junky for those of you who have to wait until this afternoon for a shot at a wave.

Outlook is for a pretty steady supply of waves. Nothing too dramatic on the size front, but you should be able to jag something this weekend. The latest run of the models suggests that Sunday from about lunch time should be the best time to go, but odds are it won’t be too small to surf tomorrow.

Longer range is looking promising right now. There should be surf right through the end of the coming week on the current reckoning. Gotta love April.

South change rattled Sydney’s windows last night and this morning finds grey skies with the chance of a  shower and light SSE winds. The MHL Sydney buoy is showing 3 metres of 9 second period south wind swell, but it wasn’t looking too impressive at Dee Why when I first checked it a little after 0700.  Looks like the bigger sets could be in the chest high range, but the quality wasn’t impressive enough to persuade anyone to get wet as the day got started.

The outlook is for this pulse to fade steadily through the day and be back to very small in about 24-36 hours. From the latest run of the models it seems that we’re in for tiny to nearly flat conditions through Wednesday. At least one of the models is showing a brief long period pulse out of the south around Thursday morning. So, if you have to pencil one in, I guess that’s the day I’d choose.

Have yourself a top old day!