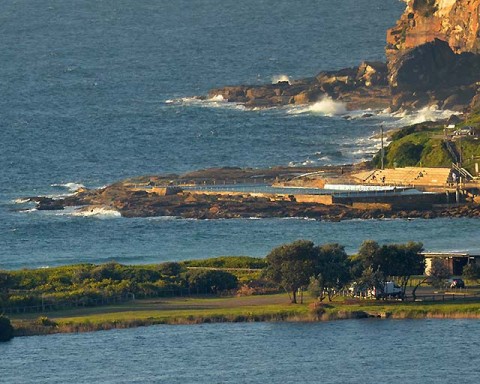 A windy and tiny day coming up for Sydney.Only a metre of NE wind swell dribbling in. Dee Why isn’t showing anything in the way of a wave and the ocean is looking choppy under clear but hazy skies. Much warmer too this morning as spring announces its imminent arrival.

Another day for other things I’d say.

Outlook on this morning’s batch of swell forecasts is not good. It would seem that the next hope of anything surfable turning up is sometime early next week.

Keep on smilin’, we all know it’ll come good again!

Partly cloudy. Isolated showers and the chance of thunderstorms, mostly this afternoon and evening. Winds northerly 25 to 35 km/h turning northwesterly 35 to 45 km/h in the morning then decreasing to 25 to 35 km/h in the evening.

Weather Situation
A high pressure system located over Tasman Sea will move east towards New Zealand on Thursday. A vigorous cold front, associated with a deep low pressure system to the southwest of Tasmania, will extend over western NSW during Thursday morning and reach eastern NSW by Thursday night. Fresh to strong north to northwesterly winds will extend across NSW ahead of the front on Thursday. A colder west to southwesterly airstream will develop over southern NSW following the passage of the front later on Thursday and extend to the northern parts of the state on Friday. A ridge of high pressure will extend over northern NSW during the weekend while another cold front moves across the far southern NSW on Saturday.
Forecast for Thursday until midnight
Winds
North to northwesterly 20 to 30 knots.
Seas
Up to 3 metres.
Swell
Easterly 1 metre becoming about 1.5 metres from the late morning.
Weather
The chance of thunderstorms this afternoon and evening.
Friday 24 August
Winds
West to northwesterly 15 to 25 knots becoming westerly 20 to 30 knots in the middle of the day then decreasing to 15 to 25 knots in the afternoon.
Seas
Up to 2.5 metres decreasing to 1.5 to 2 metres in the afternoon.
Swell
Northeasterly about 1.5 metres.
Saturday 25 August
Winds
Westerly 15 to 20 knots.
Seas
Up to 1.5 metres.
Swell
Northeasterly 0.5 metres tending southeasterly 1 metre from the morning.