Hello Friends Tapping out a quick message on the way to the airport aboard the B1. There were a few people on long craft chasing knee high and glassy lines near the pool. No real sign of significant energy immediately north from there. I reckon you could find waist pluses at dy or curly tho. […]

Hello Friends,Swell has slipped down again overnight. Out at sea it was 1.7m at 9-12 sec from 146° (SE), and along the beaches the surface conditions were glassy smooth as of 0700. Tide was dropping to the low at noon. Skies were largely clear.Beachwatch was still warning yesterday that pollution was possible at all Sydney […]

Back to weak and small

Hello Friends, Energy levels continued to fade as expected overnight and this morning sees rather weak looking waist to chest and a bit conditions. Ocean’s still somewhat lumpy but the surface was smooth at 0700. At 0500 the MHL buoy was picking up 2 metre, 10 second stuff from the SSE east. So, your best […]

Sunday morning with waves for Dee Why 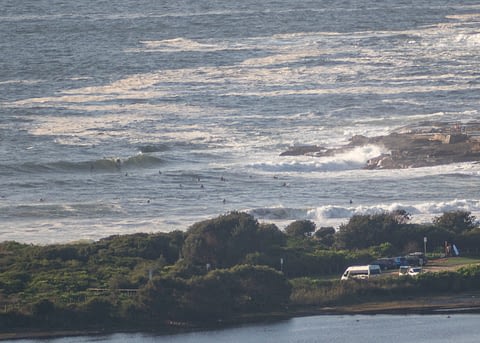 Hello Friends, It looks somewhat bumpy, but there are waves to be had at Dee Why. Size is down from yesterday, but I saw shoulder to maybe head plus sets at the point and a touch bigger just up the beach from the point. The MHL buoy showed energy from the east of 2 metres […] 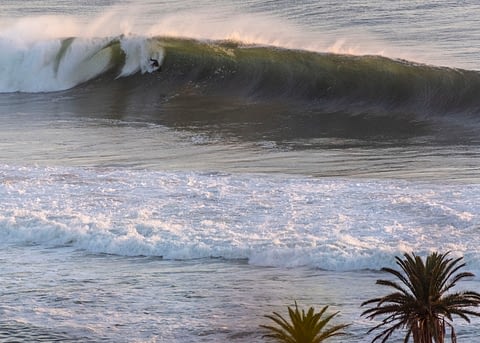 Hello Friends, Saturday started with light wind and smaller but much cleaner swell. It’s still suitable for the more experienced riders though. Sets are head plus (and then some) at most exposed spots. If you’re a beginner, watch conditions for awhile before you think of paddling out. There are still some pretty intense sets. Oh, […]

A few snaps of conditions on the Collaroy to Narrabeen stretch around 0930 this morning.

Swell beginning to arrive this morning

Hello Friends, Swell started coming up a little before dawn. Conditions were looking pretty messy though and with a southerly expected to blow all day, most spots are going to remain lumpy and junky. First chance to see the beach for me this morning was at Manly. Swell building and there were people in the […]

Update The eye is currently roughly 600 ks east of us.   The Goat’s Surf Forecast Surf forecast issued Thursday 13 February 2020: Seven day outlook for Sydney: What interesting weather we’ve been having eh… and more interesting weather is coming our way… All eyes are on TC, now Ex TC Uesi, which is set […]

Weak, bumpy but not flat

Hello Friends, Swell looks to have faded overnight but it’s not totally unsurfable. According to the MHL buoy at 0400, there was 1.8 metres of ESE at 10 second periods. It wasn’t the most interesting looking start to the day either. Skies were solidly overcast and there’s a 90% chance of more rain. Tide was […]

Hello Friends, Checked Collaroy and Long Reef this morning around 0800 and there are definitely waves in the shoulder to head plus range to be had. Swell’s coming mainly from the SE out at sea but looks more east along the beach. It’s about 9 seconds apart. Out at sea it was averaging 1.8 metres […]