Clean but tiny in showery Sydney, blowy and tiny in SoCal 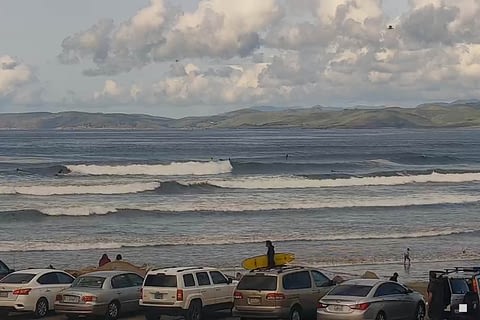 Hello Friends, First light in Sydney saw weak SW wind fanning a knee to waist high SSE swell. It was 1.6 metres at sea with a 9-second period, so south exposures should be on the upper end of the scale surfwise (maybe chest high bombs?) Tide’s high right on 0800, but it’s not a big […]

Showers here and there 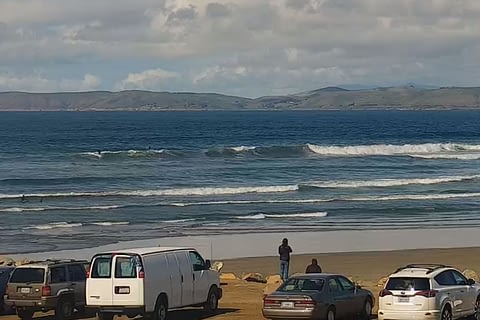 Hello Friends, Looks from the radar like a showery start to the day for Sydney. Happily for early risers, there seems to be some energy at south swell spots. Wind is set to swing south later, but as of 0700 it was light SW and swell was dead south at 2.5 metres at about 10 […]

Waist plus in Sydney but not in SoCal

Hello Friends, Looks as though you might have a few more showers today. Water quality at most Sydney beaches yesterday was rated ‘pollution likely’, so that may need to be a consideration again today. Swell was close to 3 metres at sea and nearly 9 seconds apart but also pretty straight south. Wind was SW […]

Wind bumps in Sydney and So Cal

Hello Friends, Sydney was seeing 2 metre east wind swell at about 8 seconds apart this morning. Wind was WNW and light as of 0700. Waves are likely to be soft and possibly tricky to catch because of the short period, but faces at best exposures could be as much as chest high on bombs. […]

Windblown in Syd and SoCal

Hello Friends, NE wind going from early this morning so, while there is a couple metres of 7-8 second east wind bump, surface conditions away from the protected corners are not likely to be good. (See marine forecast below) Windy and small in SoCal this morning and only just into the surfable range in Santa […]

Hello Friends, After coming up yesterday, the swell looks to be around where it was yesterday evening. Height at sea as of 0600 was 1.4m with a period of about 9 seconds. It was coming mainly from the SSE. I’d say waist to chest at magnets on mid-tide will be the go. Wind early was […]

Hello Friends, When the buoy data is showing a metre at 6 seconds from the SSE, you know it’s going to be tiny to unsurfable in Sydney this morning. The morning SSW wind might be okay in a sideshoreish way if there were waves, but there aren’t. So, I’d say you have a rest day […]

Little in Sydney, littler in Cali

Hello Friends, Looks as though Sydney surf is going to be on the marginal side today. Skies are set to be mostly cloudy and wind early was SE. Not a bad day to miss out if you have to. If you’re desperate, figure on waist high on the best ones. Was hoping for a wave […]

Hello Friends, No waves here today, and not looking exceptional in Sydney either. although at least looks like you might be able to get a knee high bump at the better exposures. My brother needed to do some work on a climate data gathering site at Carpinteria this morning, so I grabbed my camera and […]

Hi all, Just a few stills from my trusty GoPro rig. I went back to the same place I’ve been surfing all week and again it was glassy, chest to head and a bit and uncrowded (2-6 of us in the water!). Swell angle just a little too steep for the place so got smashed […]