Lookin’ like a top morning to get to your fave SE spot and jostle with everybody else for a wave. There are still a few juicy sets in the mix, but it’s definitely dropped overnight and with south wind due around midday, the conditions won’t last long.

Swell was still a couple metres from the SE at 9 seconds apart when the day began. With luck that will hold until it gets hacked up by the southerly by lunchtime.

Outlook for tomorrow is to maybe have a little energy left, but thereafter it’s looking paltry according to this morning’s collection of swell modelling.

So enjoy, but take it easy too eh? Everybody else has been hanging out as well!

Weather Situation
Sydney area
Sunny morning, apart from early fog patches in the west. The chance of a light shower in the early afternoon. Light winds tending south to southeasterly up to 30 km/h around midday.
A high pressure system south of the Bight extends a ridge across New South Wales, while a low pressure system over the Tasman Sea moves further east. This high will be the dominant synoptic feature during the next few days as it moves slowly east, maintaining a relatively dry and stable air mass over the region.
Forecast for Saturday until midnight
Winds
South to southwesterly 5 to 15 knots, tending southerly 15 to 20 knots around the middle of the day, then easing to 10 to 15 knots in the evening.
Seas
Below 1 metre increasing to 1 to 1.5 metres by evening.
Swell
Easterly around 2 metres.
Sunday 11 March
Winds
South to southeasterly 10 to 15 knots turning east to northeasterly 5 to 10 knots in the afternoon.
Seas
Below 1 metre.
Swell
Southeasterly 1.5 to 2 metres.
Monday 12 March
Winds
East to northeasterly 5 to 10 knots.
Seas
Below 1 metre.
Swell
Southeasterly about 1.5 metres.

Another messy and junky day with steady SE wind from early. Swell’s around 2 metres at 9 seconds apart and is coming from pretty much the same direction as the wind. Dee Why point was entertaining a few punters even so. Sets looked to be in the chest high plus range and while pretty chaotic looking, it was clear that you could catch something if you tried.

A high pressure system is moving south of the Bight gradually extending a ridge to New South Wales north coast. On Friday a trough is expected to develop near the coast with a low possibly developing near the south coast during Saturday or Sunday.

Forecast for the rest of Wednesday

Gee, doesn’t Sydney like a SE swell? It’s nothing amazing, but we do have a couple metres of 9 to 10 second SE swell this morning, so with minimal effort you should be able to jag something. Wind was lightly offshore to begin with, but the Bureau says it’ll go around to the easterly quarters and gradually settle to the NE this afternoon. The morning session should generally be the better option, but it doesn’t look as though the swell will decline much between now and dark.

Longer term, it would seem that there should be a little something again tomorrow, but probably less consistent and smaller than today. Beyond that, the indicators are pointing toward marginal to flat. So get out there if you can in the next couple days…

Have yourself a fun Wednesday and go well with your plans!

A high pressure system centred near Tasmania extends a ridge along the New South Wales coast. This ridge will gradually weaken as the high drifts towards New Zealand today, allowing a low pressure trough to move into the far west of the state overnight before continuing to the coast later Thursday and Friday. Following this, there are indications that a cold front may sweep across the region later on the weekend.

Winds
Southerly 5 to 10 knots tending northeast to southeasterly during the afternoon then northeasterly up to 15 knots by evening.
Seas
Below 1 metre.
Swell
Southeasterly 1.5 to 2 metres.

North to northeasterly 5 to 15 knots increasing to 15 to 25 knots during the evening.

PICS from Don: Longy at the Lugga Saturday

I was only off the plane from the US a few hours when I grabbed the camera and headed out on a shooting expedition. Ended up near the lagoon entrance at Longy where I shot for awhile before the wind started chewing things up. If you were in the water – or if you just like surfin’ pics – check out the gallery by clicking the images on this page. As usual, all shots are available for -ahem- purchase! 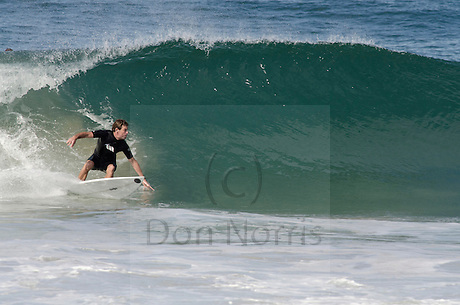 There and here again

Got that scrambled feeling you get when you’re lucky enough to be able to jump from one side of the planet to the other. I’ve been up since 0400 Sydney time but I wanted to put something up before this day slipped away into a jet-lagged haze.

In an effort to get my biological clock reset, I wandered down to the beach with the camera to do a bit of shooting and to get some sun exposure. There was still some energy around thanks to the two metre 9 sec SE swell. On the way into Sydney this morning, the plane did a turn off Royal National Park and I could see a peculiar cross-hatched swell coming in. So maybe it wasn’t surprising that it was a bit confused at Dee Why by the time I got there. Lots of folks were in the water and there were definitely a few good waves to be had, but it wasn’t quite lined up. In fact, there were really only a couple consistent peaks along the Longy to Dee Why stretch. I had a squizz at Collaroy-Narrabeen as well, but while it was cleaner looking, there didn’t really appear to be any banks and 99 percent of the waves were just shutting down. I didn’t go up for a closer look at Narrabeen, but I’d say with the swell direction, it probably wasn’t all that amazing.

Outlook for tomorrow is for the swell to back off and for the wind to be out of the NW. But it could be pretty reasonable for early risers. Swell should still be SE, so that ought to open up a number of options too. It then looks as though we’ll go into a surf slump for next week, but with luck it won’t actually get too small to surf.

A high pressure ridge over the eastern Tasman Sea is weakening as a weak cold front approaches from the west. The front will move over the southwestern Tasman Sea on Sunday and a high pressure system will move south of the Bight extending a ridge behind the front. On Monday a low pressure trough is expected to develop off New South Wales north coast and then to deepen into a low during Tuesday increasing southerly winds along the coast.

Hey grey, go away but leave us waves

Back on the coast after a brief sojourn in our nation’s capital. Back to grey skies as well, but, Huey is supplying more of what was on offer yesterday afternoon. The early risers at Dee Why were rewarded for their dedication with waves at both the point and along the beach. The Bureau says the wind is going to turn easterly by this afternoon and be blowing pretty hard, so those start of the day waves were the ones.

Swell is out of the SE at around the two metre mark and looks set to stay at about that intensity through the day and then to pick up a bit tomorrow. Given the shift in wind power settings though, I’d be expecting conditions to be less than attractive most places.

The latest forecast says we’re in for showers off and on today – and across the next week.

The low pressure system up north has apparently just delivered a waterspout or similar to Lennox Head. An early report on TV says our media monitor Shari, has hit the bakery and people are missing (!). Apparently the caravan park has been hit…

Saturday on the Easter weekend and we had enough SE swell for there to be waves getting into Manly. I spent an hour or so shooting with a couple different cameras and came back with over a hundred shots. As usual my goal was to catch regular surfers looking their best – rather than only the best surfers being regular! If you see a mate, shoot him an email. (All pics are for sale at extremely reasonable prices!)

All pictures for sale at very reasonable prices! Just click on the image you want and you will be taken to the gallery site where you’ll find an “Add to cart” option top left. Click that and you can buy and immediately download the picture.