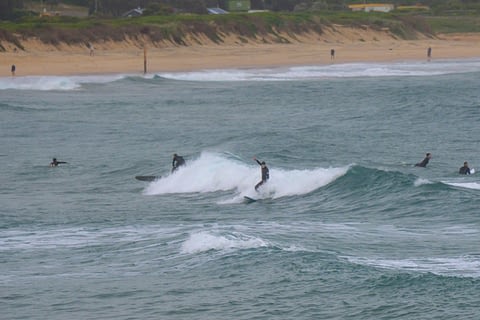 Hello Friends, The fade continues and we’re now down to weak looking and soft knee to maybe waist high on the bomb sets at magnet spots. Skies were mostly overcast and there’s a 70% chance of showers in the forecast. Wind was coming from the north at 6-8 kts before 0800 and swell was 1.1 […]

Waves around the place this morning 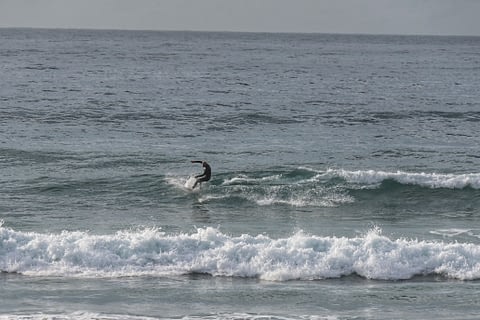 Hello Friends, Swell’s backed off some more, as expected, but there are still waist to even shoulder plus sets left in the mix at the biggest exposures. Out at sea the buoys are picking up 1.4 metres of 10-sec stuff from 130° and along the beaches, the wind was NW at 5-6 kts under high […]

Hello Friends, Another day of microscopic surf conditions for World Ocean Day. The best wave I saw was the one shown below at Queenscliff. Super clean and pretty, but very short period – and the crew on ’em were doing a lot of waiting. Air temp was 11C but the 15 kt WNW made it […]

Hello Friends, As of 0730, wind was NNW at 5-6 kts under partly cloudy skies and air temp was 10 C. Swell was still marching in too, with double overhead sets shutting down Dee Why point every now and then. Out at sea the waverider buoys were detecting a mix of 9-13 second 2-3 metre […]

Hello Friends, And the swell continues to thunder in. It was raw and 1.5x-2x overhead at Dee Why point. Quality was so-so, but there was no lack of power. Tide was low at 0640, so the morning session will have a bit of tidal push too as it comes into the modest 1.34 m high […]

Fading but fun ones still in the mix

Hello Friends, It’s a get out there and get one while you can morning in Sydney. Tide was high at 0720 and will be back to low at 1320. It should be sunny all day, but the wind will gradually get more north in it and chew up the south ends. Swell is definitely on […]

Hello Friends, Apart from the Bower and south Steyne, I didn’t see anyone in the water from Manly to Dee Why. And for good reason. Both those places were surprisingly weak looking and unimpressive at this stage of the swell, plus the water looked pretty ordinary (beach watch is warning pollution possible). Everywhere else was […]

Hello Friends, Mostly overcast and rain-promising skies this morning. But wind was light early so surface conditions were smooth and better than that the 1.7 metre 10+ second SE swell was producing shoulder plus sets at better exposures. The marine forecast tells us the Bureau expects the low offshore to deepen – meaning both an […]

Went for a bike ride at the end of the day and checked the beaches on the way home. Kinda choppy surface, but not badly so and while mostly in the waist high range, better exposures were chest to shoulder on the sets.